And then Jack woke up

Jack lives in a nice apartment, has a mundane office job and hobbies. But Jack’s world is slowly crumbling: he’s waking up.

And Then Jack Woke Up is a narrative driven first-person game which takes the player through an ordinary day in the life of Jack. However, something is strange about Jack’s life. His furniture is changing, he is recieving strange messages on his answering machine…

… and what’s with all these post-it’s?

Challenge: Create a game based on a feeling (We chose suspicion)

For the game we wanted a seemless level loading.

The game shouldn’t have any loading screens and all levels should be able to get activated when wanted. Our game is very linear and therefore a wish to defining a sequence for the levels and to progress them without knowing the current level index was requested. Information about the current level for the player was also requested.

I created a system that loads up every level on game starts and then deactivates a root component in the scene. Designers could then specify the levels that would be loaded on game start. Since the player sometimes needed to change position when loading a level the functionality to move a Transform was added.

The system was hooked into Unity’s SceneManager and worked with it.

We wanted a system to keep track on the players progress. Objects that had the quest listener component on them chose whatever quests to listen to, this quest was then connected to a function on a chosen gameobject. This made it easy for designers to choose what every quest should do. Each quest could trigger several functions as well. 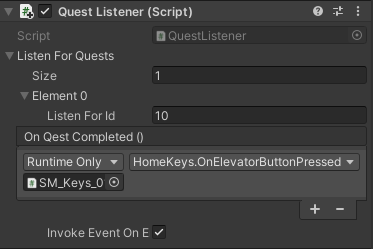 Since our game was very narrator focused we wanted to add captions to make it easier for the player to follow along the game. The system should handle adding audiofiles easy and the captions should be on a timer.